changing base SCP in mixies tutorial

this one sounds more difficult than it is, actually!

open the file in a hex editor, and scroll down just a little to find the breed name. change it to the breed name for the SCP you want. if it's shorter, zero out the extra bytes.

do the same thing a little ways down with the filepath to the breed.

do a search for the ID of the current breedfile until you find an instance of it just after the genetic information, and change that instance to the ID for the breed with the SCP you want. i find this isn't always necessary, but sometimes it helps to be consistent, haha. if you can't find it, this step is usually okay to skip, so don't worry too much about it.

scroll down a little ways to the family tree data. it's not entirely necessary to edit this, but if you want the pet to show up as the right breed in LNZ pro, you have to change it here. look at the first byte after the bytes for the pet's name. you need to change this number to the amount of characters in the new breed's name, in hexadecimal. for the orange shorthair, that's 10!

after you replace that byte, change the name of the breed in the family tree here. remember to insert or remove bytes as needed here! you don't need to above, but since you've just told the file how many characters to look for in the breed name, there needs to be that many characters, and you don't want to overwrite any of the other family tree data.


you can now run the file through PetzByte to recalculate the checksum. 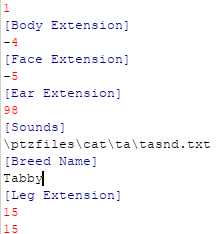 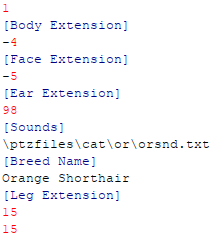 last step. after running the file through petzbyte, open it in LNZ pro and change the sound filepath and breed name to the new breed. if you don't do this, your pet will be mute!

once you're done with that, you can open the game and take out your pet, and it should have the new SCP! enjoy!