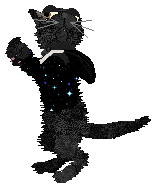 a very old cat purchased from Sunshinecat on petz auctions, back when it was still running

i always loved playing with her, and liked her so much that she was one of my most frequent subjects when i tried participating in petz-related roleplay threads

i'm very glad to have em back

ey had some minor errors before, namely the second gen russian blue eye error and oddly-colored eyelids, so i fixed that up after petfluxing em, and gave her an actual name, since for a very long time i just left it as "black", which was probably just meant to be a descriptive word for the auction

she's just as sweet as i remember, but quick to anger with petz she doesn't like as well, which i also remember

she fell in love with pride very quickly, i can't have them out together for more than a few minutes without them having kittens!